In the first post I introduced the AmazonSwiftStarter app with a simulated backend. In the second post we did set up the AWS services for the app. In this post we will connect the app with the AWS services, and let everything work together smoothly.

Download the code (Swift2, Xcode7) for this blog post from Github.
Update October 4, 2016: Code for Swift3, Xcode8
The first thing to do is to let the app point to the AWS services that you configured earlier. While configuring AWS you had to write down some identifiers. This is where you need them. Open the AmazonSwiftStarter.xcworkspace in Xcode and open the file AMZConstants.swift (in group AmazonService). Replace the placeholders with your own identifiers.

If the AmazonSwiftStarter app (version 1) is still installed on your simulator, you might better delete it. This ensures that we are starting from scratch with this new version (3) of the app.

Now build and run the app. If everything goes well you’ll see the Sign In Button, as usual. The app behaves almost the same as described in the first blog post. The biggest difference is that this version of the app uses the AWS services that you configured instead of the simulation.

There is another difference: Stop the running app and relaunch it. Now you are automatically signed in! The app is aware that you have signed in before. It shows a different welcome screen, as you can see below. I will deal with the details of this behaviour in the Code Walkthrough section. 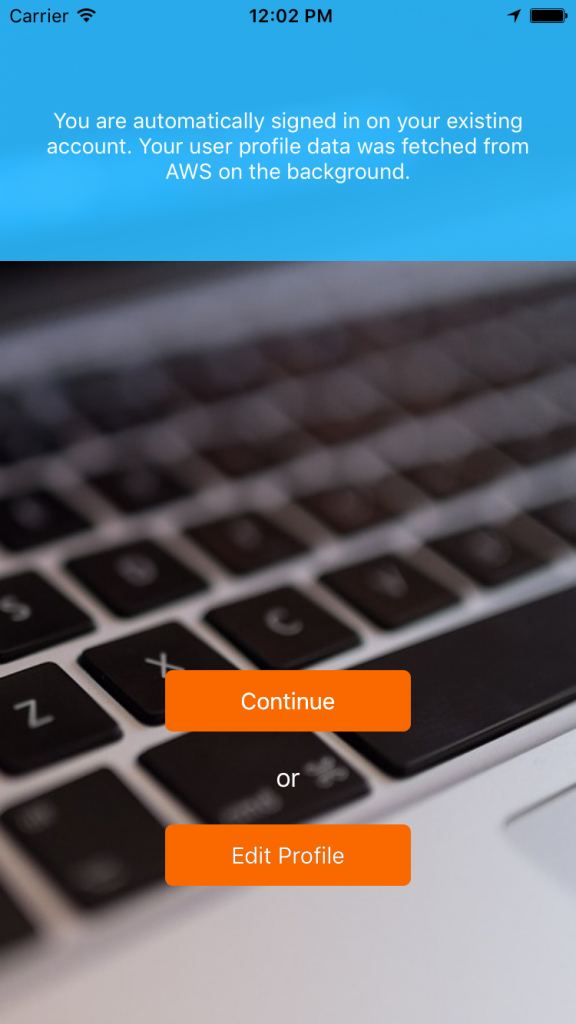 Note that I deliberately do not use any local persistent caching of data. As an example let’s consider the user profile (name and photo). At every launch the app fetches this data from AWS on the background, and keeps it in memory without persisting. In a real app you would typically have persistent storage of this data locally. There is no need to fetch it from the server all the time.

Let’s take a look at the project files: 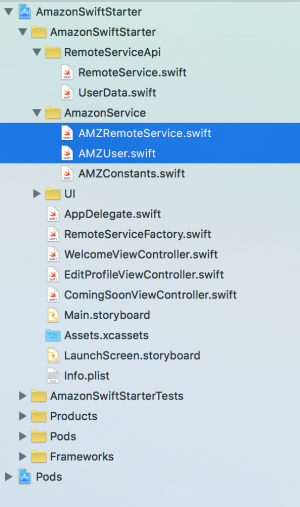 The WelcomeViewController displays the welcome screen. The logic that interacts with AWS has been implemented in the files AMZRemoteService.swift and AMZUser.swift.

As mentioned, the UI of the welcome screen depends on the signed-in status of the user. This is implemented as follows:

In line 2 you see we are importing AWSDynamoDB. This module is part of the AWS-iOS-SDK. It’s time to explore the AWS API’s.

First thing to notice is that AMZUser conforms to the UserData protocol. If you read part 1 you will understand why. What’s new here is that AMZUserData extends AWSDynamoDBObjectModel and conforms to AWSDynamoDBModeling. This enables the AWS-iOS-SDK to save our UserData to DynamoDB. We do not have to do any mapping or transformation to JSON or whatever format. It just works, the AWS SDK will take care of that.

AMZRemoteService.
This is where we used to have the backend simulation. The AWS implementation has a few more lines of code compared to the simulation 🙂 . I will walk through some code snippets first, or you can view the full code listing.

Configuration of the AWS client:

The AWS client needs some configuration in order to be able to access your services. You will recognise the constants that you have edited earlier. Note that AMZRemoteService is a singleton, that is configured when the sharedInstance is created. This guarantuees that the configuration is only done once.

createCurrentUser(..) is called when the app is launched for the first time. The Cognito identityProvider requests an identity for the user (lines 17-18). The AWS-iOS-SDK will store the returned identity in the keychain. From now on the user of this app will always be associated with the same Cognito identity on AWS. The AWS Cognito Console has an identity browser where you can verify if the identity really is created.

An AMZUser object with a unique userId is created to represent the user (lines 24-30). This object is saved to AWS (starting line 32). After a successful save the currentUser property is set (line 37) and the userId is made persistent in NSUserDefaults (line 38). The function saveAMZUser(..) will be explained below.

AWSTask is a class that makes it easier to work with asynchronous operations without blocking the UI thread. You can find find more information about AWSTask in the AWS iOS developer guide.

Fetching a user profile consists of 2 parts. We need to fetch the image from S3, and the other data from DynamoDB. This implementation uses a naming convention to couple the DynamoDB data with the S3 image of a user: the filename of the user image file is ‘userId’.jpg (line 27). An alternative solution might be to store the URL of the image in DynamoDB.

The function fetchCurrentUser(..) creates one AWSTask for downloading the image, and another one for downloading the other data. It uses the persistentUserId as a parameter for both tasks (line 5 and line 9). It tries to download the image first (line 12). If this succeeds the image will be saved to a temporary file. If there is an error it assumes there is no image. Then it will download the data from dynamoDB (line 21) and update the currentUser if successful (lines 31-35). If an image was downloaded earlier the temporary file is loaded and the imageData of the user is set (lines 26-30).

Implementation of saving a user profile:

We already have seen how fetchCurrentUser(..) used two AWSTasks to retrieve data from S3 and DynamoDB. When saving a user we also have to save the image and other data separately. It’s obvious that if there is no imageData we do not need to upload an image to S3 (line 11).

We have created our first Swift app with a scalable backend. For me it was quite challenging and time consuming to figure all this out. I’ve spent la lot of time reading AWS docs and Stackoverflow posts. I tried out AWS sample projects. There have been moments where I was nearby the point of giving up and start looking for other Parse alternatives. How much time should I invest in getting a grip on the complexity of AWS?

I couldn’t find an easy step by step tutorial, so I decided to write one myself. Good for me, and hopefully good for you too. Now, having written this tutorial, and having a working app, I am starting to get more confident about AWS being a valid alternative for my app-backend. I am more familiar with the AWS docs and services, I am more experienced with the AWS console and I learned the basics of the AWS iOS SDK.

So, I will continue my research: to replace my Parse backend I will need more features. Saving data directly to DynamoDB and saving mages to S3 is not enough.

I am currently researching and prototyping the AWS services Lambda and APIGateway. It’s going pretty well. My goal is to extend the AmazonSwiftStarter app with an example that uses these services. Additionally, I have some other important features that I will need to address later on:

Geospatial querying: My commercial app needs to be able to find all other users of the app within a circular range. I have no clue yet how to do this using AWS. There was an easy API for this in Parse. There’s a Geo Library for DynamoDB, but it is not yet very clear to me how to apply this. I miss the Parse Geo Query.

Security: In the current version of AmazonSwiftStarter the user profiles are not secured. How can I set access rights to user data in DynamoDB? In Parse I used Object-Level Access Control (PFACL). A user has read/write access to his own profile data, and read-only access to the data of other users. Is this possible in AWS, and if so, how?

I you can give any advice or suggestion on these topics please comment below or contact me directly.